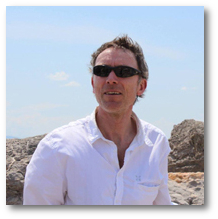 At 17 I wanted to enroll in an art school but the vagaries of life have distracted me. So I opted for a specialist school and practiced this trade for more than 15 years. Neighborhood animations, adventure playground for children, shelters for teenagers in difficulty.

And then on a call for contests I participated in the late 80s to an exhibition organized by the school of fine arts Metz and I signed up in Design section. I was already 32 years old. This is where I forged my interest in contemporary art in general.

1988 my first drawings and pastels. 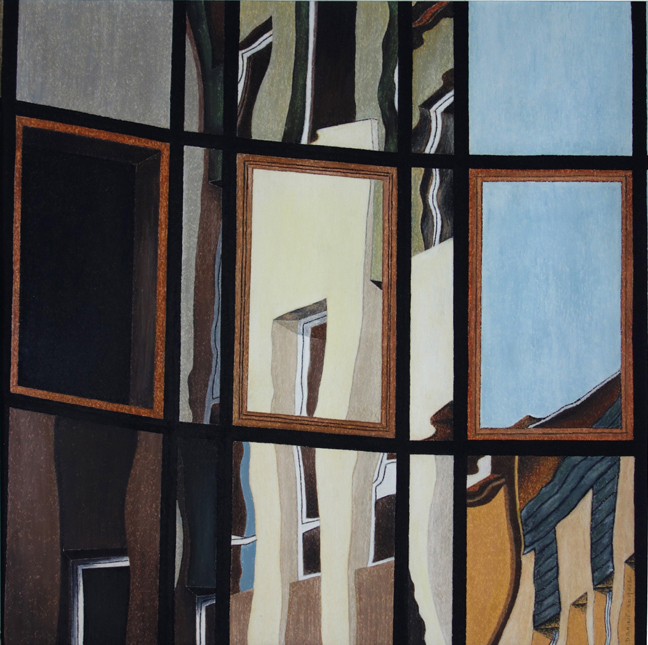 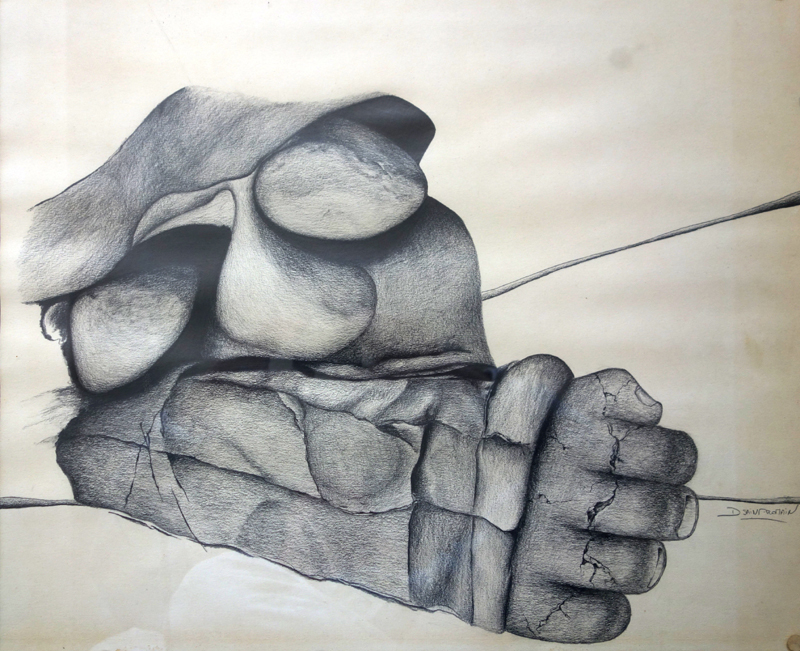 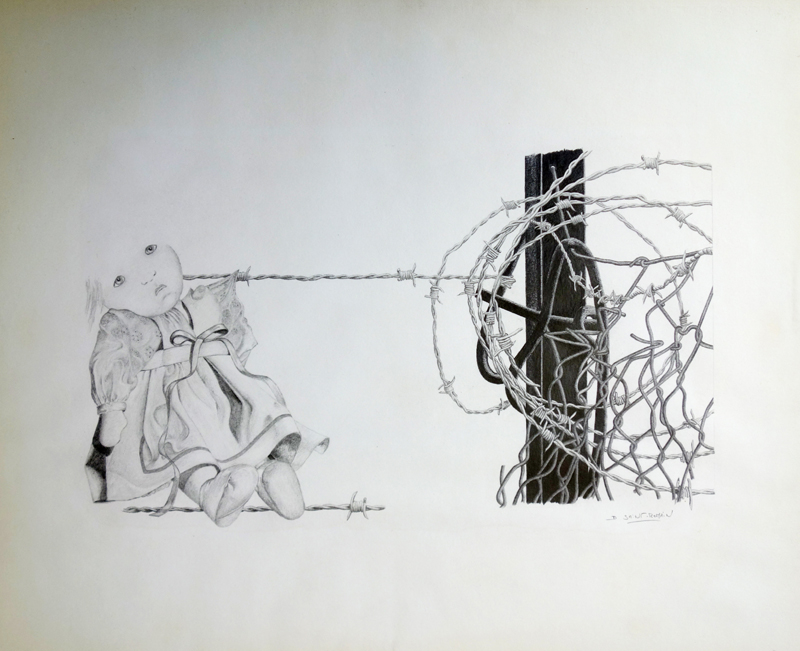 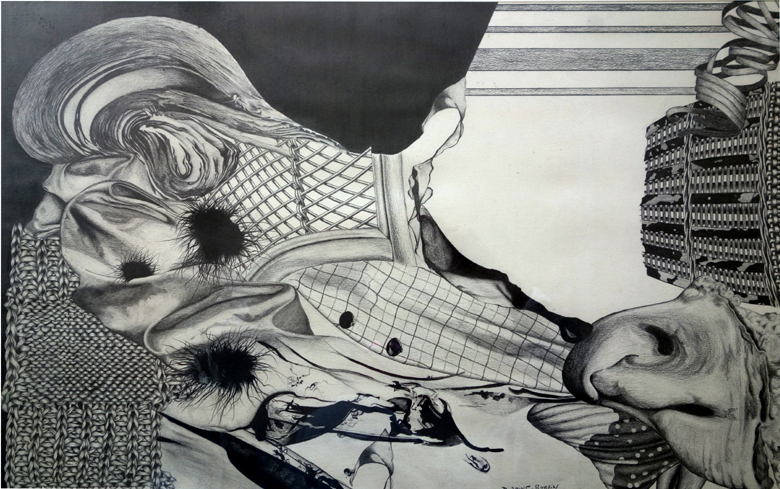 During this period I took part in several painting and art furniture competitions, notably at the Montreal International Design Center in 1989.

Diploma in 1991 DNAP / DNSEP I then worked as a designer for 15 years in the field of collective catering (creation of professional kitchen utensils, waste collectors, dishes for local authorities…) and shop furniture. There, I confronted the DAO and the PAO by creating products, flyers, catalogs and logos. But also to the management of the production of products (plastic injection, rotomolding, thermoforming, welding, tube and sheet forming), models, prototypes, and the organization and layout of stands for Trade shows, actually I started with a blank sheet and I was making a finished product ready to sell with its promotional documentation and its manufacturing and assembly line.

During those years I began to touch acrylic. My first paintings are from 1995 to 2004. 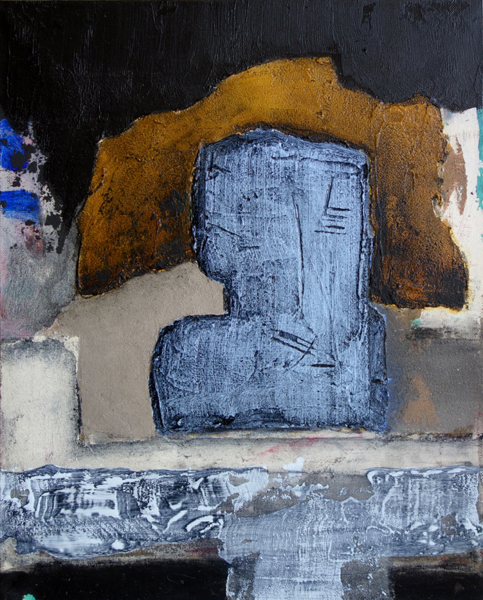 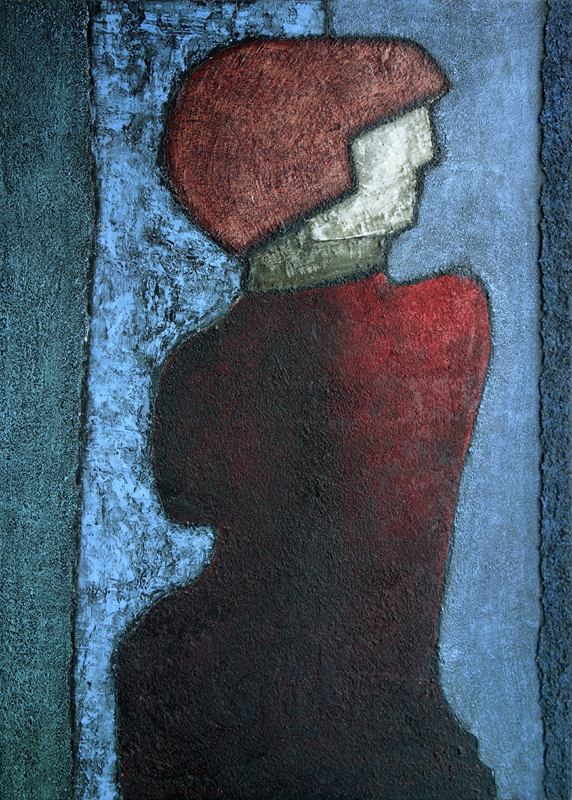 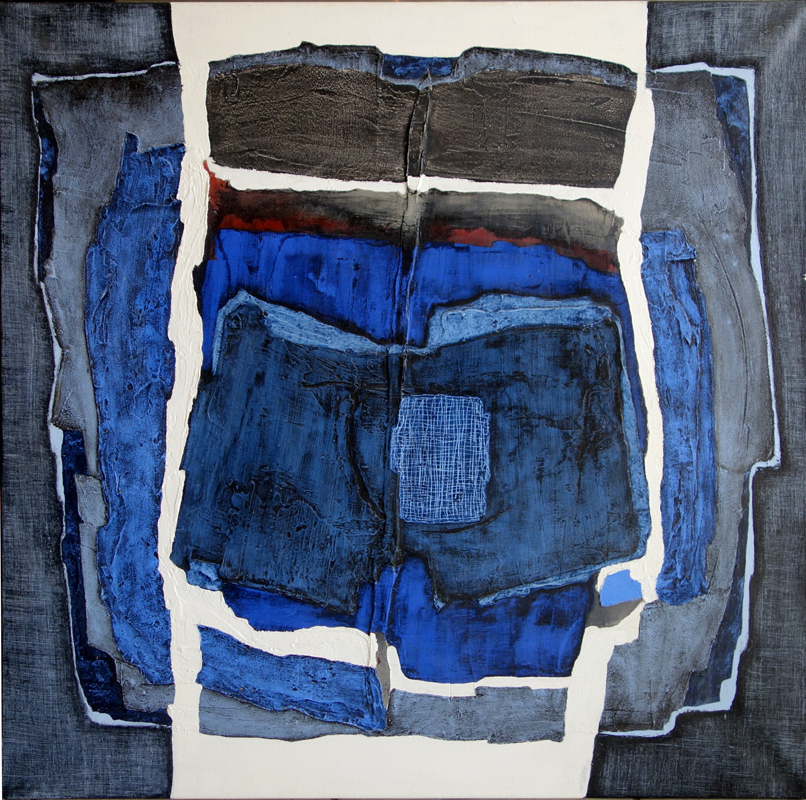 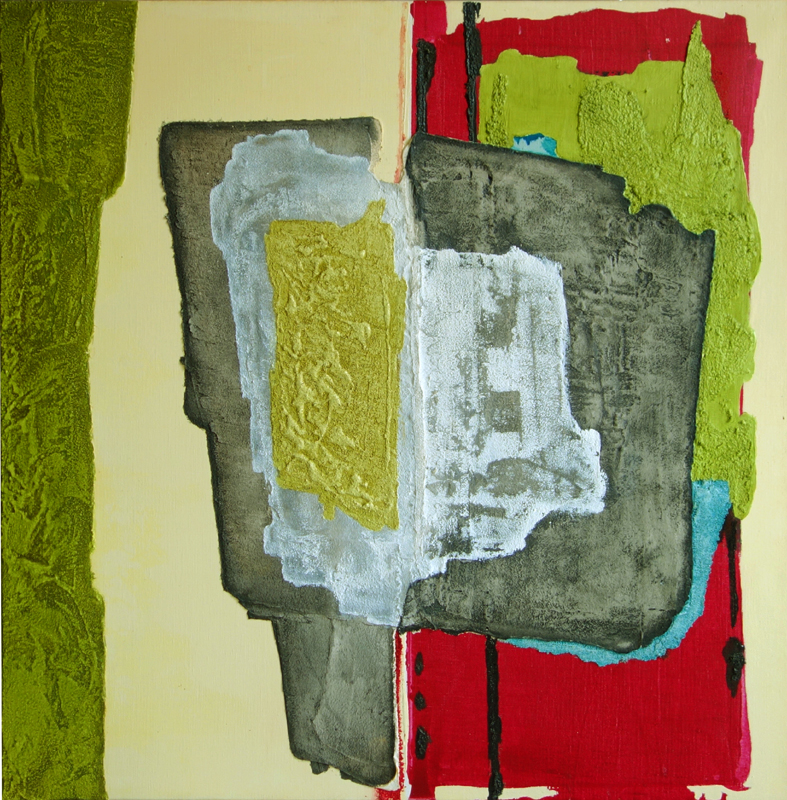 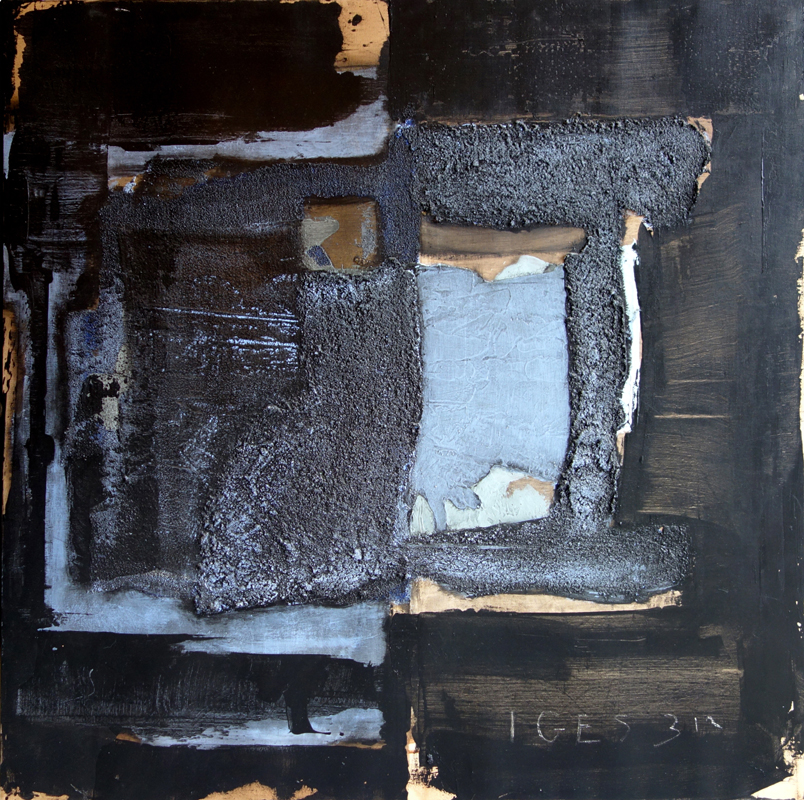 But the desire to manage my own business once again diverted me from creation. I bought a metallerie because I also needed to confront me with the matter. And the time of an artisan being what it is I no longer touched the painting.

On the other hand I managed to give myself a few hours to create metal furniture (unique pieces that nowadays my place of life). 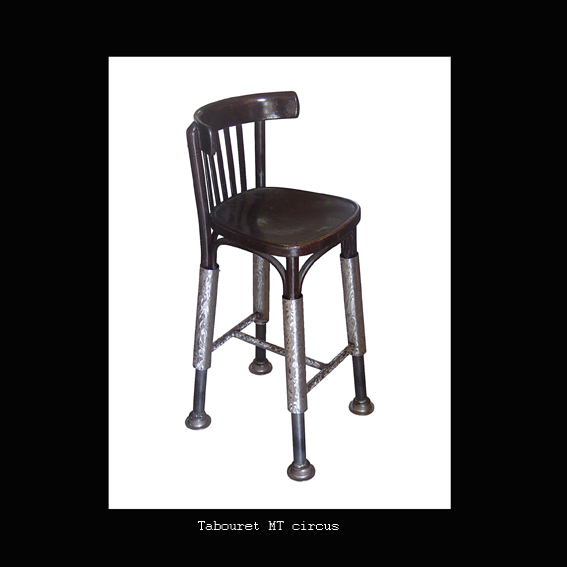 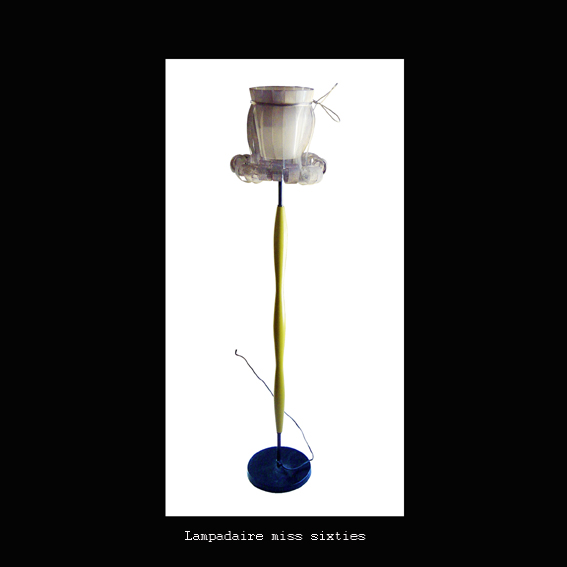 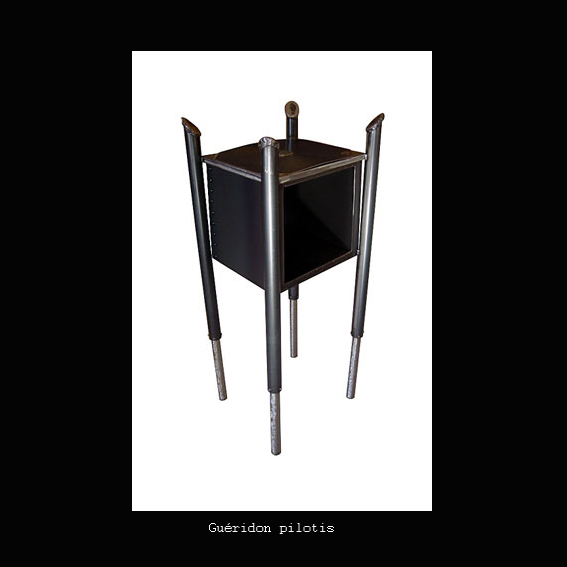 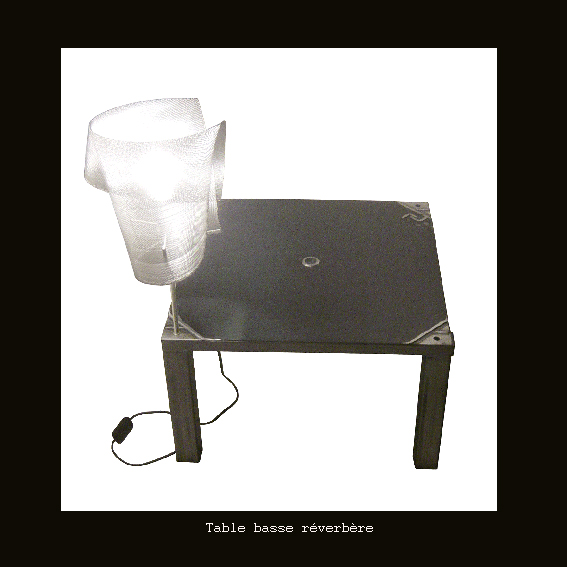 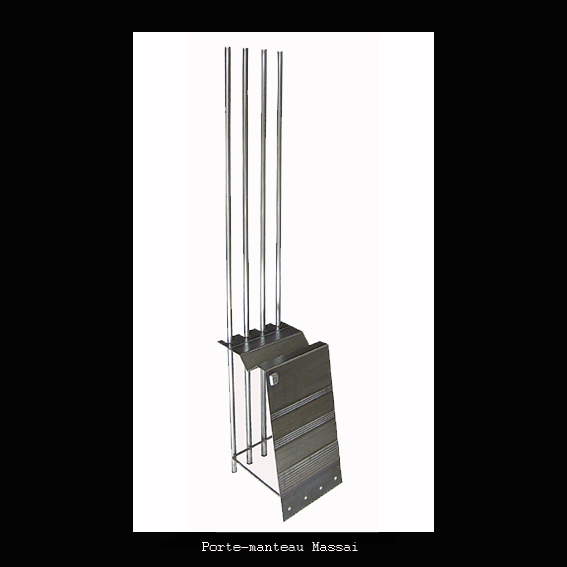 And to realize sculptures… 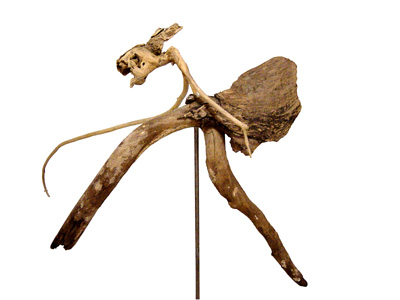 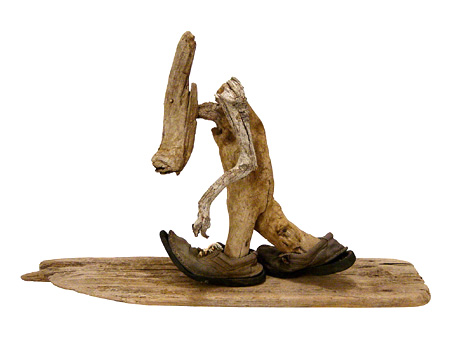 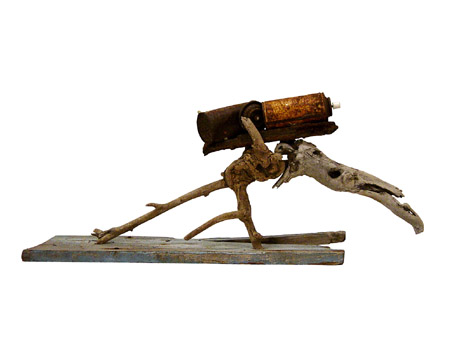 It is also my vinyl collection period, which allowed me to rebalay all the musical culture of the years 40,45 to 80 / readings, bibliographies, discographies, an exciting period.

The material is essential (if I had not found my balance in the painting I will have practiced the sculpture) and it is found elsewhere in my paintings.At the end of a professional life in three times during which I learned a lot (both at the human level and at the creative level) I can finally devote myself to my desires.And so since January 2016 I started painting again. 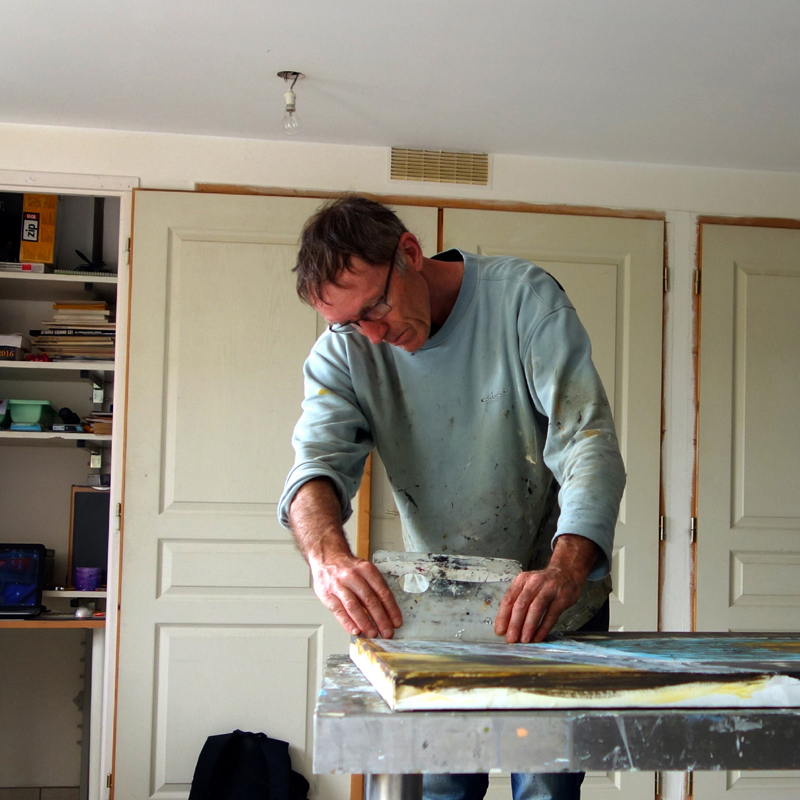 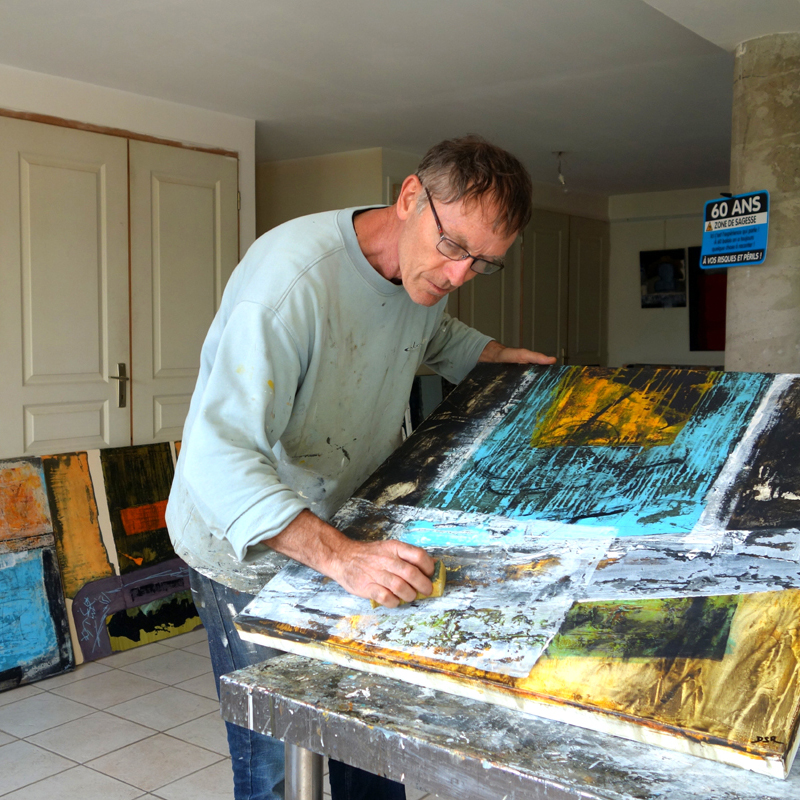 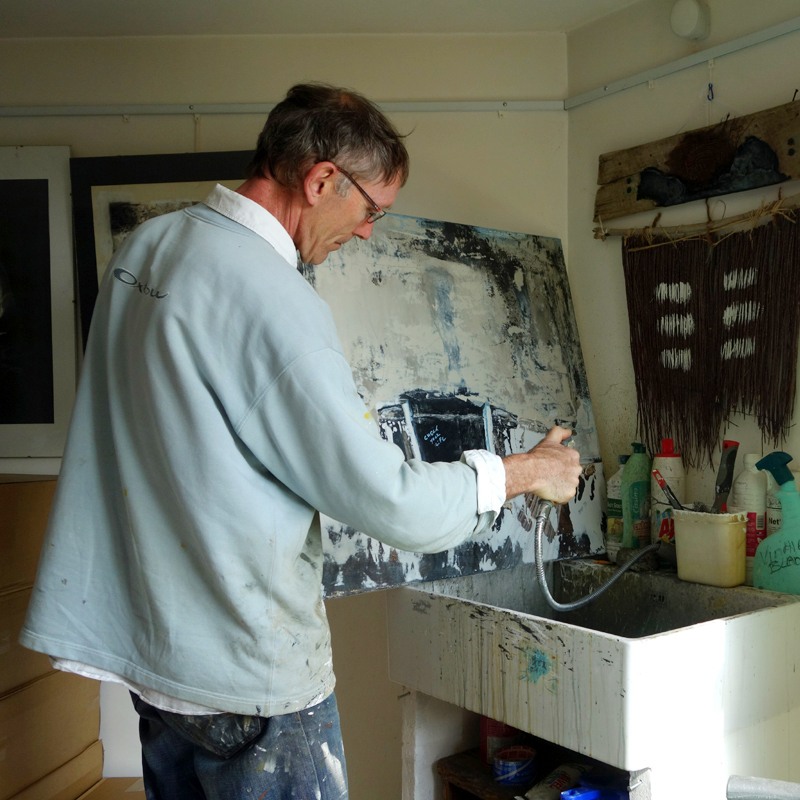 2016 was a year of takeover with more allegorical work that was close enough to what I was doing around the 2000s. 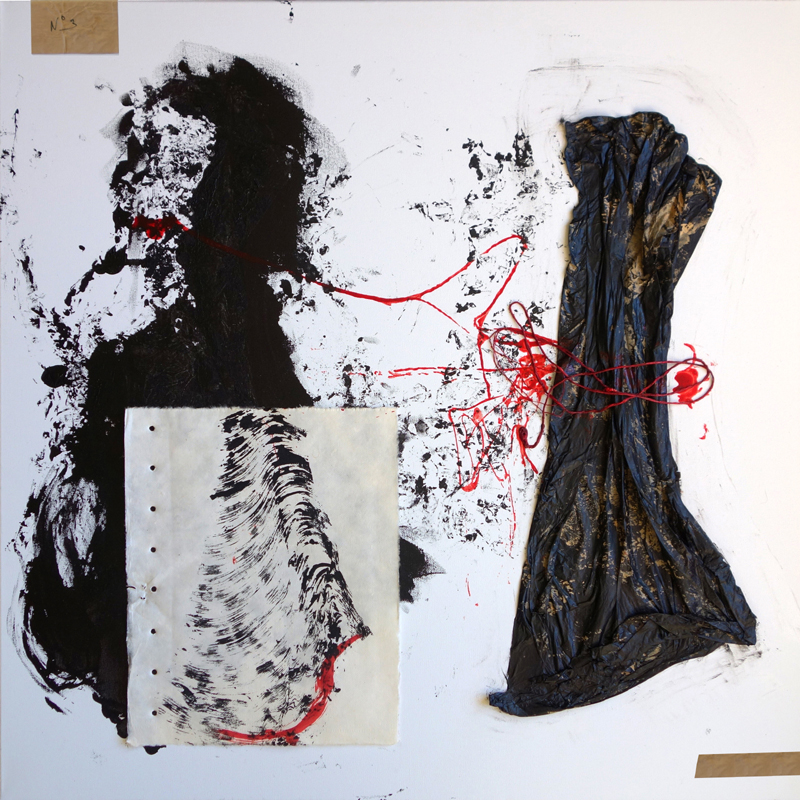 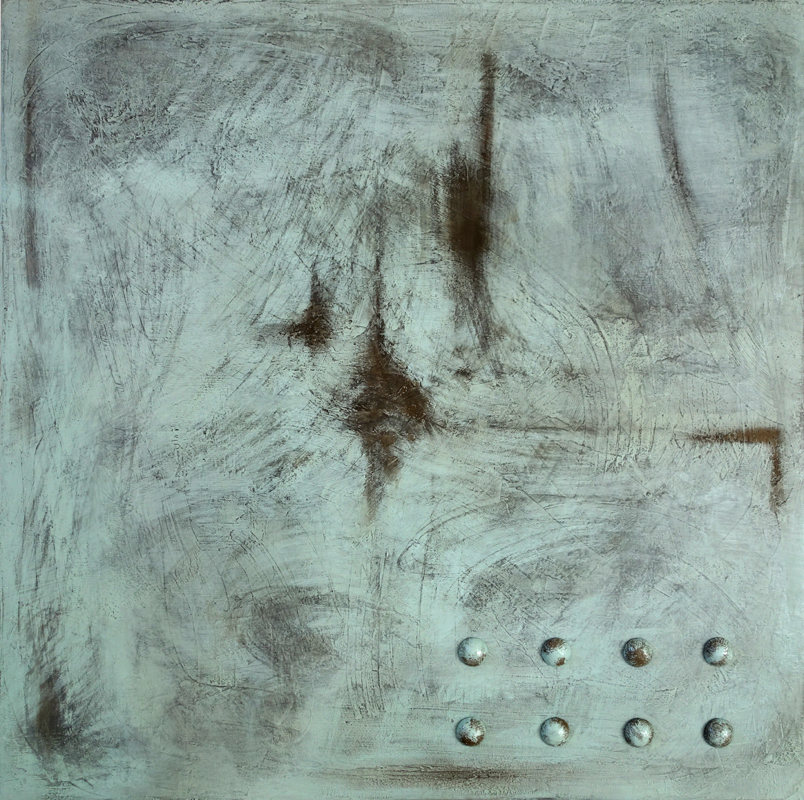 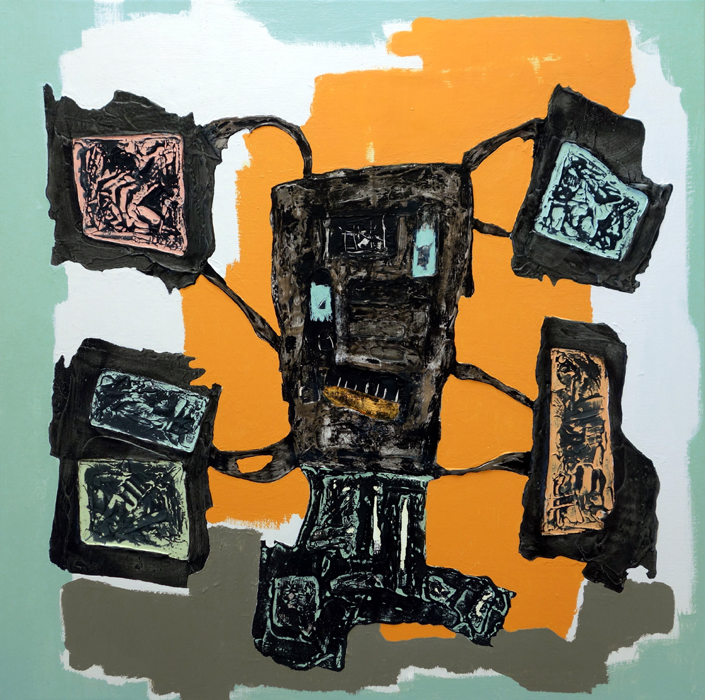 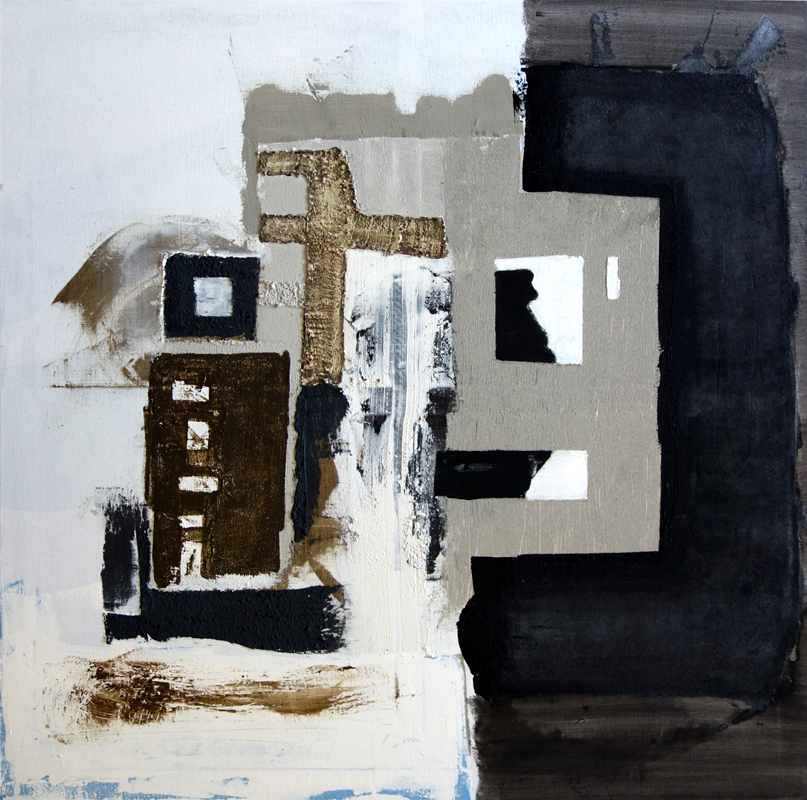 From the beginning of 2017 my main theme was the urban landscape. After visiting cities like Berlin or Barcelona where my daughters stayed I realized that the graffs that invaded the walls were not what interested me the most. Of course Street Art is an integral part of the urban landscape but I think that my attention is more captured by the support, the walls that receive them. The trace left by human activity, friction and dirt over passages, deliberate damage, scratches, replamings, messages left to others.

But also the wear of time, rust and dirt that flow, the patina on the palisades all that is left by what falls from above, rain, dust, humidity. The efforts of nature to take place are all marks of a radical and merciless struggle that constantly reminds us that it does not need us and that it will be there again well after our passage. My research is in parallel with the urban exploration that inspires many contemporary photographers. But here, no exploration, everything happens in the head and gesture, in a conflictual relationship not between urban / human activity and nature but between support and input, another way of saying between the web and the artist.

In this my paintings are often dirty, the bright colors do not attract me. Too much color baffles me. I would say that my works are at the crossroads of abstract expressionism, neo expressionism and art trash.

And just as urban exploration (which consists in visiting and photographing places created and then abandoned by man), we refer to strong feelings such as nostalgia, revolt, discomfort… my pieces of walls, in an allegorical and furtive way, sometimes generate their own ideas and concepts: our relationship to water, war, the passing of time… That’s what I want to see and transmit.

There I use all the technique that the practice allows me to discover over the works. The method is empirical: you act then you learn. Because it is a continual discovery: Lavis, glaze, washing, tearing, impasto, overlays, sprinkling, grooving, scraping… Colors does not react in the same way to these tests and here is the difficulty.

The layers are there to be scraped and to reveal the lower layer and this brings surprise and discovery. In each one of them I have to look for the relief, the color, the light or the absence of light, which, joined to each other, make appear what must be shown. Enhancing them while damaging them and having only a brief idea of what I will find. This is what hides the strata of painting that I seek to discover to reveal what they contain idea to promote, emotion to transmit, concept to develop. What I intend to express is contained in the actuality and urbanity of our cities, of our ways of life.

For me a canvas is not a decoration on a wall. It is above all the means a privileged expression of the artist. The vector by which he expresses what he feels and what he has to say. Aesthetics count less than content. We have been told in the past “everything is art”, so the first of the creators would be nature. Personally I am among those who think that art is the fruit of a process and / or reflection. It is a medium that serves to convey the emotions or ideas of the artist to meet the others.

Acrylic is a great material that dries quickly (I need that, I’m always in a hurry). At 60 years old you do not see life in the same way as at 20 years old. We finally have time but we do not know how long it will last. 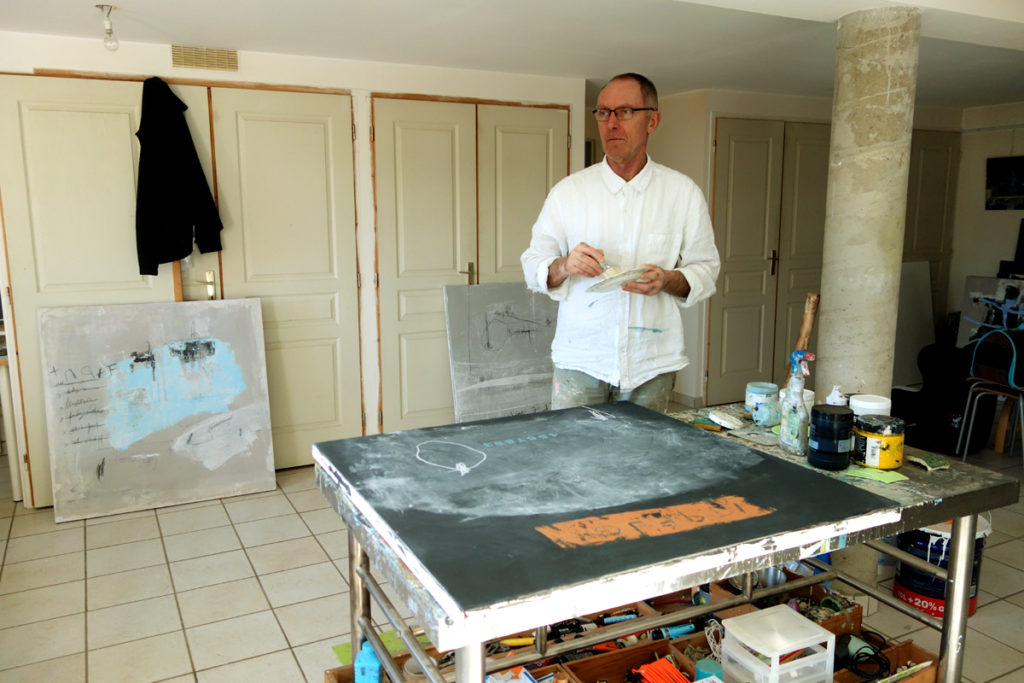